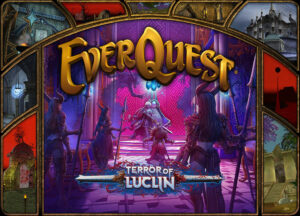 *** Night of Shadows ***
Welcome to EverQuest: Night of Shadows, the 29th expansion for EverQuest!
Norrathians have ended the conflict between Mayong Mistmoore and Luclin herself, but can they relax their vigilance? The recent attention of Luclin has emboldened the Akheva, and they continue their plans to conquer the moon!
As war rages across the surface of Luclin, disaster has befallen Shadow Haven deep below. The mysterious sealed door has been smashed open, and the great spirit trapped behind it has rampaged through the city, leaving death and destruction before retreating to the unknown caverns it escaped from. What maddened the spirits? How can the Akheva be stopped? Can Shar Vahl survive as war threatens to engulf the city? The truth lies in the shadows — will you survive to find it?
– Learn new spells, combat abilities, and Alternate Abilities.
– Find new items and learn new tradeskill recipes.
– Explore seven new zones.
– Participate in new raids and quests.
– Complete new achievements.
– Enter Firefall Pass through a new passageway in Umbral Plains opened by the moonquake.
– Store and use tradeskill components like never before with the new Tradeskill Component Depot. See details below.

– The Kar`Zok (Raid): Restored the missing currency reward to this event.
– Updated the “Master of” text to correctly reflect what is needed to complete the achievements for the following expansions:
– – Veil of Alaris
– – The Ring of Scale
– – The Burning Lands
– – Torment of Velious

– Updated the description for all ranks of Enhanced Minion so that they indicate the levels they affect.

– Corrected an issue where NPCs (such as raid chests) could only hold 36 items.

– Corrected an issue that caused mercenaries to not receive the correct focus equipment which could result in them being underpowered.