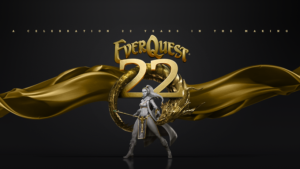 – Agents of Change are now available for All Access members on all servers.

– Bloogy Shellcracker will no longer accept Water Dragon Meat. However, his brother, Roogy Shellcracker, will be able to help you with that.
– NPCs that have an active loot lock will now only accept trades from players who belong to the credited party.
– Cikdew has found her voice and will be looking for assistance during Nights of the Dead.
– Arlien Browch has been seen hauling a large shipment of pumpkins. She should reach the Commonlands Tunnel just in time for Nights of the Dead.
– The mission Gorowyn: Balance of Power now correctly references Gorowyn as the target zone in the Quest Journal, rather than Chardok.

– Fixed an issue where Steadfast Servants would refuse to cast Servant’s Haste on players who have unlocked any ranks of the Item: Hidden Power / Ancestral Memories AA ability line.
– Dark Rites charges are no longer consumed when memorizing spells.
– Updated the confirmation popup box for translocation spells to not disappear if you enter combat.
– – Updated the confirmation popup box for translocation spells to last for 2 minutes.
– – Updated translocation spells to (once again) be cast by casters if they are in combat and land on targets that may be in combat.
– Corrected an issue where the Gambit line of Wizard spells could cause the Wizard to damage themselves with an offensive proc.

– Made a speculative fix to missing Overseer quests.

– Fixed an issue with the loot on some prominent Velious raid targets that prevented proper randomization on Mischief and Thornblade.
– Reduced the respawn time of Gloradin Coldheart by some amount.

– Corrected an issue where NPCs would drop you from their hatelist if you were too far away under the wrong conditions.
– Agents of Change are now available for All Access members on all servers.
– Login timeout errors no longer display the wrong error message, such as “String not found.”
– Added a chat message when receiving a translocate.
– – The dialog box from the kickplayers command will no longer invalidate other dialog boxes, like those from translocation spells.
– – Translocation spells can now be cast on yourself.
– Broadcasts of system-wide messages will now always have a single space before the message is displayed.
– Logging in with 500 or more items in your Item Overflow will now display a message, suggesting you collect your belongings.